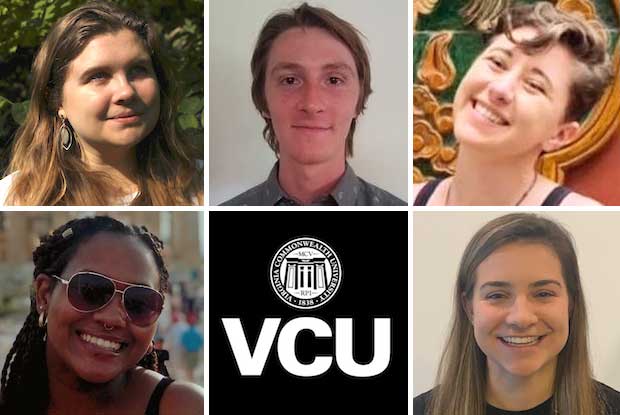 Five recent graduates from Virginia Commonwealth University have been awarded Fulbright scholarships for 2020-21. The Fulbright scholarships are highly competitive awards funded by the U.S. Department of State Bureau of Educational and Cultural Affairs. These academic year awards can fund independent research or creative projects, graduate study or English teaching opportunities in more than 140 countries around the globe. Fulbright student scholars also serve as cultural ambassadors from the United States to their host countries.

With the addition of Bolda, Connolly, Cregan, Griffin and Williams, VCU has had 64 Fulbright scholars since 2006.

“The Fulbright Scholarship is an amazing opportunity for these recipients,” said Jill Blondin, Ph.D., executive director of the VCU Global Education Office. “Not only is it prestigious and highly competitive, but it promotes intercultural exchange and understanding in a way that will have a lasting impact on the recipients and so many others.”

Bolda was selected to serve as an English teaching assistant in Argentina. After completing her Fulbright, she will continue to pursue a Ph.D. in chemistry education at the University of Iowa. Eventually, she plans to work as a chemistry educator. Spending a year teaching English in Argentina will allow Bolda to improve her Spanish skills to the point where she plans to work as a bilingual educator. Throughout her undergraduate years, she worked to encourage younger students to continue their fascination with STEM topics. She also taught martial arts. Bolda was inspired to apply for a Fulbright because of her experience spending a semester abroad in Granada, Spain. She grew up in Richmond and attended J.R. Tucker High School.

Connolly, a member of VCU Honors College, was also a recipient of a Critical Language Scholarship. In the summer of 2018, she studied Mandarin and lived with a Chinese family for eight weeks through the Critical Language Scholarship program. She returned to China in the summer of 2019 with a study abroad program through the VCU Painting + Printmaking Department. These experiences inspired Connolly to propose returning to China for a creative project to research bilingual signage and exhibitions in Chinese museums and tourist sites to show how design can create spaces that are more accessible to people of different cultural and language backgrounds. In addition to being involved in the Honors College and the School of the Arts, Connolly was president of the Catholic Campus Ministry during her senior year. She grew up in Harrisburg, Pennsylvania, and attended Trinity High School.

Cregan was selected for a creative project in Indonesia. She will study wayang, an ancient style of theater encompassing puppetry, dance and mask performance. She plans to create a short animated film inspired by Indonesian theater traditions and modern Indonesian culture. While she was a student at VCU, Cregan interned with The Valentine. Since graduating, she has spent a year as a media intern at the Smithsonian Center for Folklife and Cultural Heritage and has been working as a freelance animator and videographer. After completing her Fulbright, she hopes to work as an animator with Disney or Pixar. Cregan grew up in Arlington, Virginia, and attended Washington-Liberty High School.

Griffin, a member of VCU Globe, was selected to serve as an English teaching assistant in Germany. She spent six weeks studying in Greece in the summer of 2019 with the support of a Benjamin A. Gilman International Scholarship, and that experience inspired her to become a study abroad ambassador with VCU’s Global Education Office and apply for a Fulbright. She plans to build on her Fulbright experience in Germany by completing a master’s in education after she returns to the U.S. and then becoming an English as a second language teacher. She plans to work with underserved populations that are learning English in order to take advantage of other educational opportunities. Griffin is trained classically in vocal and orchestral performance, and plans to use her musical background in the classroom and when exploring German culture. She grew up in Chester, Virginia, and attended Thomas Dale High School.

Williams was selected to serve as an English teaching assistant in India. He began studying Hindi with the support of a Critical Language Scholarship in the summer of 2016. After graduating from VCU in 2016, he completed a master’s degree in religion at the University of Hawaii at Manoa. During that period, he began tutoring English language learners and became interested in pursuing a career in English as a second language or international education. After his Fulbright experience, Williams plans to continue working as an English teacher abroad or as an ESL teacher in the U.S. He grew up in Virginia Beach and attended Princess Anne High School.

Raven Wilkes, a 2015 graduate with a degree in theater performance from the School of the Arts, was named an alternate for the 2020-21 Fulbright/John Wood LAMDA Award in Classical Acting to the United Kingdom.

Bolda, Connolly, Cregan, Griffin, and Williams applied for the Fulbright U.S. Student Program through VCU's National Scholarship Office, which serves as the Fulbright Program Adviser for VCU. The office assists VCU students and alumni who wish to compete for prestigious national and international scholarships. The office is currently recruiting candidates for the 2021-22 Fulbright competition. Rising seniors, graduate students and recent alumni who are interested in learning more about Fulbright opportunities should make an appointment to meet with a member of the National Scholarship Office staff.