Author: Tom Gresham, University Public Affairs
Three Virginia Commonwealth University students have been selected for the 2020 Critical Language Scholarship, a highly competitive scholarship funded by the U.S. Department of State for the study of 15 languages deemed critical to the United States’ diplomatic and security interests. 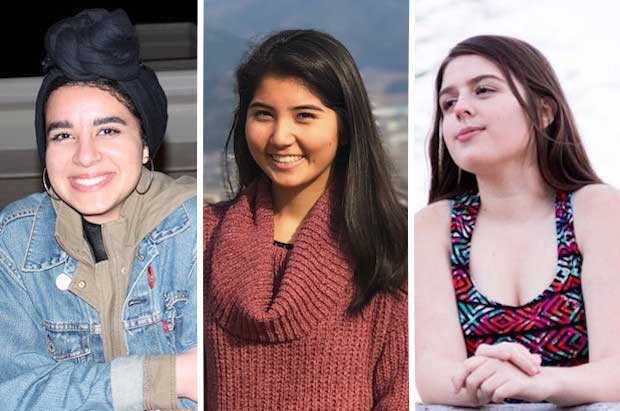 Right: From left: Maryum Elnasseh, Naomi Ghahrai and Macy Pressley. The three were among the approximately 550 students selected this year nationwide as Critical Language Scholars.

Three Virginia Commonwealth University students have been selected for the 2020 Critical Language Scholarship, a highly competitive scholarship funded by the U.S. Department of State for the study of 15 languages deemed critical to the United States’ diplomatic and security interests.

Maryum Elnasseh, a senior majoring in journalism in the Richard T. Robertson School of Media and Culture and political science in the College of Humanities and Sciences; Naomi Ghahrai, a sophomore majoring in chemistry in the College of Humanities and Sciences; and Macy Pressley, a junior majoring in digital journalism in the Robertson School, were named 2020 Critical Language Scholars. The scholarship program is designed to encourage outstanding students to pursue the study of languages that are not frequently learned in the United States. In this year’s competition, approximately 550 Critical Language Scholars were selected from a field of more than 5,000 applicants. With the addition of Elnasseh, Ghahrai and Pressley, VCU has had 27 Critical Language Scholars since the program was launched in 2006.

Elnasseh, a member of the VCU Honors College, was selected to study Arabic. After completing her undergraduate degree, she intends to work as an international journalist with a specific focus reporting on issues facing refugees in the Middle East. Eventually, she plans to attend law school and work on international human rights issues. Throughout her undergraduate years, Elnasseh has been active with United2Heal at VCU, a student-led organization that collects excess medical supplies and ships them to areas in need around the world, and she currently serves as president of the organization. She grew up in Richmond and attended Deep Run High School in Henrico County.

Ghahrai is also a member of VCU Honors College and applied to study Japanese. She grew up speaking English, Farsi and Japanese with her family, but has limited experience formally studying Japanese. Ghahrai eventually intends to become a physician-researcher and wants to work with patients and research colleagues from various ethnic and language backgrounds. In addition to her involvement in the Honors College, she is also a Diversity Ambassador with the Office of Multicultural Student Affairs, a member of the Leadership Council in the College of Humanities and Sciences, and a writer for The Commonwealth Times. Ghahrai grew up in Glen Allen and attended Mills Godwin High School.

Pressley is a member of VCU Globe and was selected to study Indonesian. She received a Gilman Scholarship to study in New Zealand in summer 2019, where she also did an internship at the Wellington Zoo. Long interested in the environment, Pressley wants to study environmental policy in graduate school and eventually work for the Federal Emergency Management Agency, working to raise awareness about natural disasters in the U.S. and abroad. Ultimately, she would like to help coordinate international response teams dealing with natural disasters. Pressley grew up in Crozet, Virginia, and attended Western Albemarle High School.

Due to the COVID-19 pandemic, the Critical Language Scholarship program for summer 2020 has been canceled. Elnasseh, Ghahrai and Pressley are eligible to reapply for summer 2021, when the program plans to again offer intensive summer language training in all 15 languages.